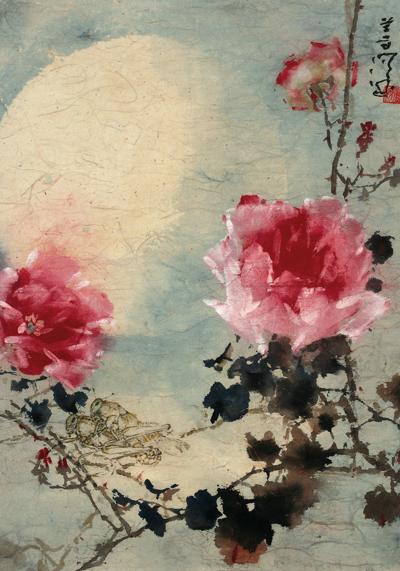 I want to share an architectural element that Westerners might not be familiar with, but that is very much a part of the Chinese landscape: Moon Gates. They’re circular gates that usually act as a passageway to a garden. Traditionally, they are made from stones or bricks and the ornamentations around the moon gate usually carry spiritual meaning. It is considered good luck to walk through a moon gate.

The moon is a significant symbol in Chinese culture—so much so that we still celebrate the new year based on the lunar calendar. On one hand, the moon represents yearning, as in the legend of Chang’E, a moon goddess who was forever separated from her lover after she drank the elixir of immortality. On the other hand, it represents abundance, as in the celebration of the Moon Festival, which takes place every autumn on the brightest full moon of the year, when Moon Cakes can be consumed with abandon.

Recalling the moon stirs up a special and tender nostalgia for me. Growing up, we would have moon gazing nights where adults would point out the rabbit that lives on the moon with Chang’E. I remember convincing myself that if I squinted hard enough I could see the rabbit hop on the moon.

I already mentioned in House Diary #3 that I have an affinity for circles. Naturally, I did momentarily contemplate incorporating a moon gate into the house design. Realistically, there wouldn’t be enough space to build one that would do the form justice. And as much as I enjoy romanticizing about them, it would be hard to pull off without it looking pastiche. I’m much more into the idea of designing with respect to context and the surrounding environment in mind.

What fascinates me more about the idea of the moon gate besides its circular form is the symbolism and story behind this architectural element. It’s something I think is lacking in a lot of modern architecture. Let’s bring back the poetry.