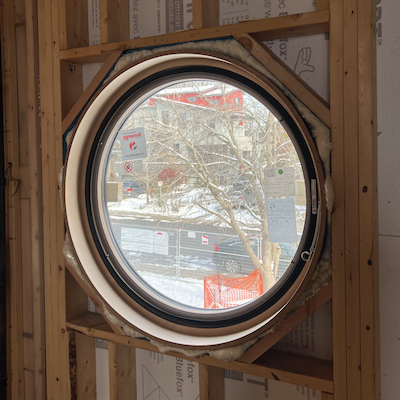 It’s been almost a year since I wrote my last house update. Part of the reason is due to pure frustration at the delays and hurdles we continue to contend with. There seems to be no end in sight. I don’t generally consider complaining to make good writing, but perhaps this update will simply serve as a warning to those who dare to embark on similarly deranged projects as building a house from the ground up.

The other reason is that I sort of lost my way, lost my raison d’être for documenting it in the first place. Especially in a time of a mounting housing crisis, it feels tone-deaf to talk about my house, let alone building one to spec. Today, instead of hearing me wax poetic about the design of the house, which was my original intention, I’m going to talk about the realities of the project.

Let’s set the scene: currently I’m typing this on a laptop in a makeshift office on the ground floor of my parent’s house – the very house I grew up in, where the ghosts of my past self hunt me on the daily. Even whilst being tormented by the memories of my past, I can’t help but muse over the connection between space and memory. Like the way scents can inspire nostalgic fervour, spaces can do the same. I file this away in my catalogue of spatial phenomena.

How did we get here? Over a year ago when we thought it was a wise idea to sell our old house because our good friends offered their yet-to-be-renovated house to live in at cost, we felt the universe was cutting us a break. We would be moving closer to all of our friends and we’d be making a wise economic decision: sell our house while the price is high! Never mind that I was 7 months pregnant and that packing up our entire decade of accumulated stuff would be overwhelming to say the least, but we somehow pulled it off. I also raged against our old house, finding fault in every crevice and surface. I wanted out. Looking back, it probably had more to do with spending a whole pandemic holed up inside than the actual house itself.

The only upshot was moving minutes away from my close friends who all have babies, so the past year has felt like living inside a sisterhood commune. For that reason, I don’t regret our decision. I simply regret my naivete. Of course the project was going to run long and we would need to scramble for another place to live. And of course this brings me to my current setting, typing away like a fugitive in my parent’s house.

It’s here that we will spend the coming winter and spring, at least. To be clear, my parents do not live here. They live in a condo and have generously given their house to us to live in indefinitely while we see our project through. They also come often to cook and babysit, so honestly, it’s not so bad. I have no right to complain. I must also commend my dear husband who has remained positive (even buoyant) throughout our second move, which definitely makes the transition smoother.

A year ago, our projected move in date was late summer of 2022. For a while, things were on track – the ground was excavated in record time and the framing went up without a blip. They wrapped the whole thing up, pumping heat into the house from giant gas tanks, and continued to work throughout the winter – plumbing, electrical, HVAC, and insulation all getting done without any delays. There was a lull in early spring as we waited for the windows to come, which were projected for May. Even with that delay, we were still on track. May rolls around however…and we were told the windows were now projected for July/August. Without the windows, there wasn’t much we could do. Everything from drywall to exterior cladding fed into the windows. At that point, our contractor asked us if we wanted to work around the windows. This would incur extra cost because they would need to build overhangs on all the windows and pay the drywall contractors extra to split up an otherwise one-shot kind of work. It makes the work riskier too – if the new drywall got wet in a bad storm, we would have to start over. On top of that, we might only be ahead by a few weeks. Not wanting to incur extra cost or take extra risk, we decided to wait. At that point, I had a feeling the windows might be more delayed, but I yearned for my intuition to be wrong.

It is now November and we only have 70% of the windows in. The last of them are projected to come in December. A whole 7 months of delay. And I’m still holding my breath because who knows? There’s a little thing called the a global shortage. The glass industry which is owned by like 3 companies in North America are running into all sorts of delays. This obviously affects the window manufacturers. At least that is the story I’m told. I don’t know. There’s a lot of opaqueness and few answers.

I won’t even go into the extra costs that continue to rack up. We’re now mmmm almost double our original budget. Part of it was us adding scope. Part of it was me railing against using cheap materials and not wanting to sacrifice any integrity in finishes. Part of it is just the reality of rising cost, rising inflation, and living through this permacrisis we all find ourselves in. Someone asked me if it’s cheaper to build your own than to buy a ready-made house. I didn’t know how to properly answer this question, because on one hand, is it possible to build a house that is cheaper than what you can find on the market? For sure. In fact, Sam’s family from Quebec, who are all sort-of in the trades, have built houses for a fraction of the cost, because that’s what they do. When we told them it would take us a year to build, I kid you not, they were incredulous. His cousin just finished building his own house in 5 months. They couldn’t wrap their head around why it takes that long to build a house. In short, for the rest of us schmucks who have nary a skill to hang our hats on, it most definitely would cost more to build.

But that’s not all – I don’t think anyone who is interested in building a bespoke home is in it for the cost savings. I’m a deranged, incurable stargazer who is often completely out of touch with reality. I’m also just too particular for my own good. I drive my architects and contractors crazy for changing the sconces for the umpteenth time.

But say you’re a sane, levelled headed person (which I am not) and you have some knowledge of the trade and you can fish out a dubious contract when put to the test, can you build a house more cost-effectively than large construction companies who are buying materials at scale and building with the efficiencies that come with copying-and-pasting their designs with abandon in the burbs? You know the answer. (No). There is obviously nothing wrong with those homes – economy of scale is a thing of beauty. You just can’t use the cost per sqft of those houses to calculate how much it would cost to build a custom house.

So that’s where we’re at. Over budget and over time. Holed up at my parents house, waiting for the ground to freeze and then thaw so that once the geese migrates back, we can finally move into our house.

These days we celebrate micro progress. The concrete of the stairs on our back porch was poured recently. We snuck into the house like teenagers to etch our initials before it cured. We then climbed up onto our roof, gazing into the sunset, dreaming that, one day, perhaps, this house shall be ours.